This Halloween be prepared to fend off phantoms and vampires that lie in your home. Not the monsters, the power suckers. Phantom loads and vampire power stem from electronics that are turned off, but are still using power from the wall. Think of it as a leaky facet; although the knob is turned off, there is still a single drop of water that falls every five minutes. And after a few days, that single drop of water wasted can add up to gallons of water wasted. This is the same with vampire power- some milliamps of current are leaked to the electronics while they are turned off and after a few days, it becomes a lot of wasted energy and wasted money.

“Standby mode” for computers or printers tend to continue drawing current from the wall outlet they’re plugged into. Most of the time the vampire power is under 25W because there have been regulations set in place to minimize power wasted[1]. However this is not always the case. If a load in your home is broken or incorrectly wired, there could be tons of energy going to waste everyday. An eGauge employee knows first hand: phantom loads can be haunting.
After listening to his parent’s concerns about their energy bill on multiple occasions, an eGauge employee decided it was time to install an eGauge meter for their apartment complex. The issue was costly energy bills the tenants of this apartment complex were receiving every month. It seemed either someone was using a ton of energy or there was a phantom load hiding in the complex. Once the eGauge was installed, each apartment and the entire complex could be monitored for energy usage. Oddly enough the total energy of each apartment did not add up to the total energy the building was using itself. The eGauge was rewired to look into the other parts of the building and found the source of energy waste. The elevator for the apartment building was broken using the heater for the hydraulic fluid continuously even when not needed. Management was called, the elevator heater was fixed and the entire apartment complex had a huge decrease in energy costs.
This is just one of many heroic stories that consist of finding phantom loads inside homes. There are plenty of stories from all over where consumers have had pricey energy bills because they didn’t realize there was a device plugged in or broken that was drawing tons of current and wasting energy.The solution to these stories are always the same and always seem simple: install energy meter, find phantom load, and fix it.
The “fix it” part of the story varies. Perhaps the load is equipment that was broken and actually needed to be fixed, or there had to be some changes to the way the equipment was plugged in.
To completely eliminate vampire power, a surge protector can be used[2]. A surge protector allows users to completely shut off current running to the electronics and appliances[2]. Below is an eGauge graph of a home theater system (television, speakers and Xbox gaming system) that is plugged into a surge protector. Compare the different wattages between when the system is powered on, when the system is powered off (or in “standby” mode) and when the system’s surge protector is turned off: 181 Watts, 38 Watts, and 17 Watts. That’s a whopping 21 Watt difference from standby mode and completely off. 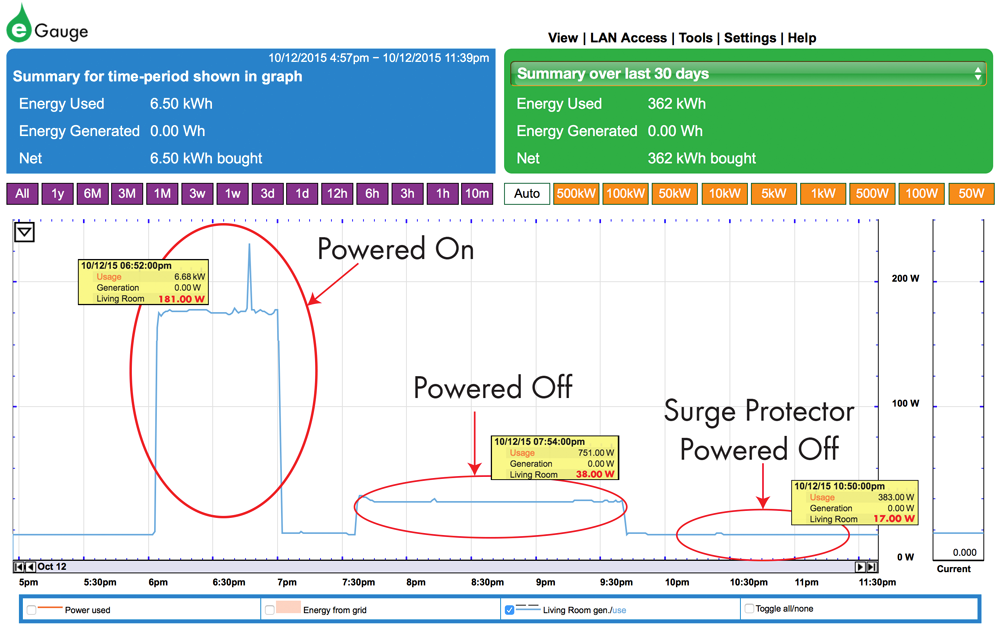 The other way to completely turn off a device? Unplug it[2]! If your phone charger, television or toaster isn’t needed at the moment, unplug the cord from the wall. That’s a sure-fire way to stop any excess energy usage.
Halloween is a time for blood sucking vampires, not energy sucking vampires. This October spend some time learning about your appliances and how much energy they use in standby mode. Then find your way to “fix it”! Save some energy and save some money. Happy Halloween!